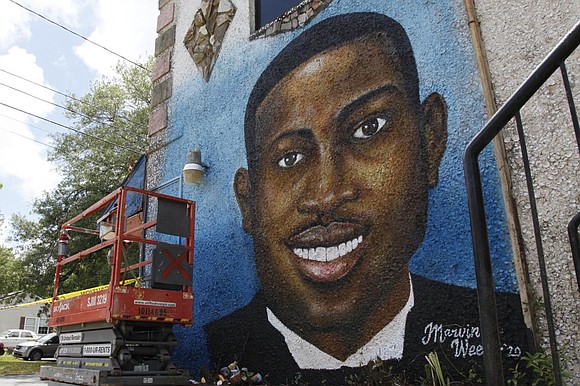 A painted mural of Ahmaud Arbery is displayed on May 17, 2020, in Brunswick, Ga., where the 25-year-old man was shot and killed. Three white men charged in his death were convicted of his murder on Wednesday, Nov. 24, 2021. (AP photo)

Wanda Cooper-Jones, mother of Ahmaud Arbery, spoke outside the courthouse after the verdicts were read. She told the crowd that was gathered that she wanted to say "Thank you."

"I just want to say thank you, guys. Thank you. Thank each and every one of you who fought this fight with us. It's been a long fight. It's been a hard fight. But God is good," she said.

Gregory McMichael, Travis McMichael and William Bryan look on during their trial at the Glynn County Courthouse, in Brunswick, Ga., in November 2021. A jury convicted the three men of murder and other charges Wednesday in the February 2020 slaying of 25-year-old Ahmaud Arbery. (AP court pool photo)