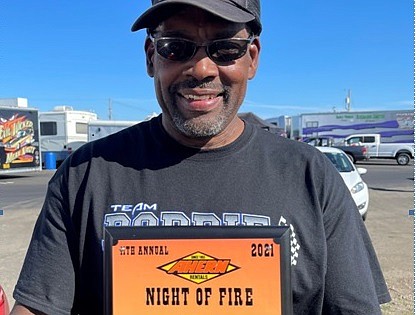 Doug Lyons is champion drag racer who is promoting safe alternatives to illegal street racing. Lyons competes on sanctioned race tracks in Portland, Seattle and Woodburn with his modified 1967 Camaro. “If you want to be a drag racer, it’s best to do it on a track,” he says.
Champion Portland Drag Racer Douglas Lyons Sr. understands the tragic consequences of street racing.

One of the few Black drag racers in the state, Lyons admits to making mistakes when he was a young man when he started out illegally racing on Portland streets but he gave it up after witnessing negative outcomes.

Portland champion drag racer Doug Lyons shows off his modified 1967 Camaro which can hit 170 mph in eight seconds utilizing its “big block Chevy engine” and added nitrous oxide. Lyons wants to get more Black people to join the drag racing world on the track and not on the streets, “where it’s safe and you can have some fun.”

“I saw too many bad crashes,” he said. “It got too dangerous and there were too many close calls. You get tickets, you get your license suspended and you can get in an accident. It’s just not worth it.”

But Lyons, 68, didn’t give up racing, and instead began a 30-year career racing on sanctioned tracks where he’s won many trophies and plaques.

Now he wants to get more Black people to join in and race at the track and not on the streets, “where it’s safe and you can have some fun.”

He’ll even teach you how.

“I would work with them to tell them what they need to know, how to get involved,” he said. “It can be expensive or non-expensive and the faster you go the more expensive it is.”

Lyons, who has about 20 trophies, drives a modified 1967 Camaro with a “big block Chevy engine” that is boosted with nitrous oxide and can hit 170 mph in eight seconds.

He said the first thing you have to know is how to work on an engine.

“You have to be willing to do most of your own work if you don’t have a lot of money to pay people, and you also have to do it in a safe manner. Safety is always first,” he said.

Drag racing can get expensive, depending on the kind of car you have and the motor, which can range from $2,000 up to $20,000 and even higher. Lyons recommends getting sponsorships to help with the cost.

But it’s worth it if that’s your thing, he said, and it’s for all ages, men and women.

Lyons races at three tracks, the Woodburn Dragstrip, the Portland International Raceway, and the Pacific Raceways in Seattle. Races are between two cars that go on a straight course for an eighth or quarter mile, and whoever gets there first is the winner of the round.

Racing on a sanctioned track is a lot of fun and beats the risks of illegal street racing, Lyons says.

According to the Associated Press, illegal drag racing exploded in popularity across the country during the COVID pandemic, taking advantage of fewer cars on the road, often with deadly consequences.

Many cities and states are fighting back by passing stronger laws and the Portland City Council voted last August to crack down on street racing. Businesses on North Marine Drive have spent thousands of dollars installing fencing to keep street racers away from paved lots.

Speed racing on city streets is a Class A traffic violation and according to the city’s website, “You can lose your vehicle on the spot as well of thousands of dollars…fast!” Street racing carries a basic fine of $435, but if charges includes reckless driving and reckless endangering of another person, these crimes are punishable with up to a year in jail, five years of probation and/or a fine of up to $6,250, and insurance rates can skyrocket.

That’s why Lyons and other drag racers encourage street racers to go legit and race on a track.