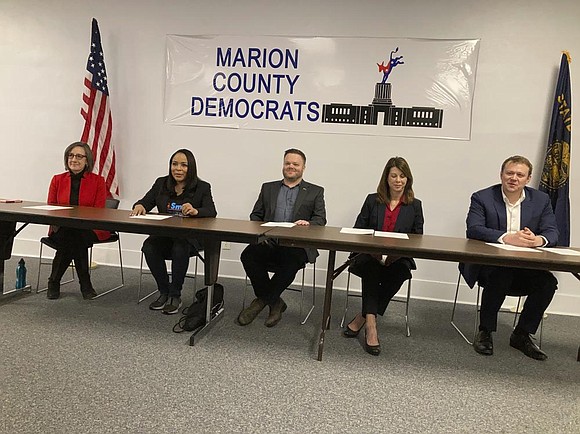 A diverse group of Democratic candidates for Congress, (from left) Andrea Salinas, Loretta Smith, Cody Reynolds, Kathleen Harder and Matt West attend a press conference in Salem April 12 to condemn the national Democratic House Majority PAC for taking sides and dividing Democrats in their new District 6 race, spending nearly a million dollars on behalf of one of their opponents in the May Primary, white male Carrick Flynn. (AP photo)

(AP) — The battle over who represents Oregon’s new congressional district became heated Tuesday as six Democratic candidates, including former Multnomah County Commissioner Loretta Smith, jointly denounced almost $1 million in support for a rival party member by a super PAC that focuses on electing Democrats to the U.S. House of Representatives.

“This effort by the political arm of the Democratic establishment to buy this race for one candidate is a slap in the face to every Democratic voter and volunteer in Oregon,” five of the candidates for the 6th District seat said at a news conference. One of the candidates couldn’t attend because of a scheduling conflict.

They noted that candidate Carrick Flynn, who received the support from the House Majority PAC, is already backed by cryptocurrency billionaire Sam Bankman-Fried’s political action committee, which has provided about $5 million in support for Flynn, mostly in TV ads.

Loretta Smith, who wants to be the first Black woman from Oregon elected to Congress, said she feels betrayed by House Speaker Nancy Pelosi for the PAC’s support for Flynn, a white man educated at Yale and Oxford universities who hasn’t held elected office.

She said Black women’s votes were key to getting President Joe Biden elected in 2020 and to giving Democrats a majority in the House.

It is unclear, however, what role, if any, that Pelosi had in throwing the PAC’s support to Flynn. Pelosi’s top political fundraiser, Mike Smith, last year became the PAC’s senior adviser.

The PAC’s spokesperson, C.J. Warnke, said in an email that it “is dedicated to doing whatever it takes to secure a Democratic House Majority in 2022, and we believe supporting Carrick Flynn is a step towards accomplishing that goal.”

He did not address the complaints by six of Flynn’s rivals for the Democratic nomination. Oregon’s primary election is on May 17.

State Rep. Andrea Salinas, another of the Democratic candidates for the U.S. House, was befuddled by the PAC’s backing of Flynn.

“Why? Who was behind it? Why was this decision made? We have a wealth of candidates, four of whom are women, three women of color — this is a diverse district,” Salinas said. “I’ve been doing the work for diverse communities for a long time.”

Flynn’s campaign manager, Avital Balwit, said the campaign is “grateful for the confidence and support” of the House Majority PAC and others who are backing Flynn.

“Our campaign is rooted in Carrick’s Oregon values -– hard work, opportunity, and supportive, resilient communities. That message is clearly resonating,” Balwit said in an email.

Oregon’s 6th congressional district was created by the 2020 U.S. census and extends from Portland’s suburbs to the southwest, including the state capital of Salem and towns in the Willamette Valley and the Coastal Range. The Cook Political Report said the new district would vote “likely Democratic” in the November election.

Kathleen Harder (left) and Loretta Smith, two Democratic candidates for Oregon’s new 6th congressional district, stand next to a map of the district during an April 12 news conference, joining with four other candidates to criticize the House Majority PAC's support for supporting a rival and dividing Democrats in the upcoming May Primary. (AP photo)