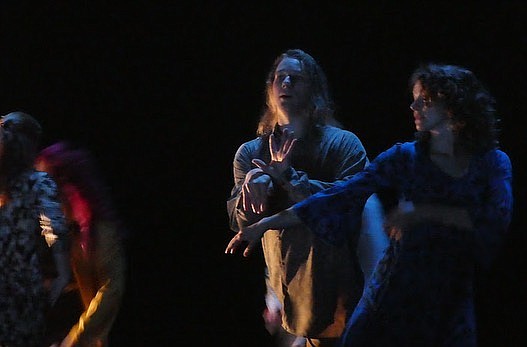 Image by Imago Theatre
In a dance or theatrical performance, whose intentions are reflected in the movements of the humans on stage?  To what degree are the performers exercising agency?  To what degree are they instruments for the intentions of another—the choreographer, the director?  To what extent are any of those intentions conscious?  Honest?
Such questions were the playful preoccupations of “Voiceover,” which played through July 30 at Imago Theater and is the second of three new works of experimental theater presented by Jerry Mouawad (Imago Theater’s co-founder and co-artistic director) and various collaborators this summer.  These are works that invite audience members to set aside their expectations of what theater is, including how they about their role as an audience member, and open their minds along with the creators and cast.
“Voiceover” was a decidedly meta exploration of the inner and outer workings of theater and performance.  The production assembled a cast of eight and employed voiceover to capture their inner thoughts and those of “Jackie,” the creator of the work they are bringing to life.  It was a quirky and delightful production, impressive for the tightness of the direction and the specificity of each movement and beat.  The cast made use of every physical and vocal tool, which worked to comically blur the lines between conscious, unconscious, and self-conscious and between inner and outer forms of expression.

Mouawad collaborated in creating and directing that production with Drew Pisarra, who serves as dramaturg in the third of this summer’s new works at Imago, “Lumen Odyssey.”  Pisarra also transformed that play into a short story by reimagining the script (written by Mouawad and Carol Triffle, co-founder and co-artistic director of Imago Theater) as conceptual fiction.  The play, a science fiction take on a mother-daughter conflict in which Triffle will star, will premiere on stage at Imago on August 26, around the same time the short story will appear in Litro magazine.  “Lumen Odyssey” will offer another opportunity to expand audience’s experience of theater, through September 17.