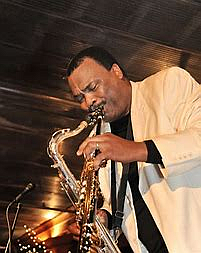 Ronnie Laws
The Dazz Band and Ronnie Laws will be performing at the Soulful Cup R&B Concert on Saturday, September 3, 2022 from 12pm - 6:30pm at the Colwood Golf Center. VIP doors will open at 11am. GA doors open at 12pm. The Dazz Band has performed since 1976 and continues to perform today. The Dazz Band's first album for Motown was Invitation to Love (1980).With a list of hits such as Let the Music Play and the single "Knock! Knock!" which reached the top 50.

Their single “Let It Whip” reached No. 1 on the US Billboard R&B chart and won a Grammy Award for Best R&B Performance by a Duo or Group with Vocals. The band released "Drop It" in 2019, their first single in almost 20 years, on the Bogi Music Group label.

Ronnie Laws is an award-winning tenor saxophonist and composer in the '80s. He was an international festival and club draw. Three singles from his first three albums all went gold, as did their respective long-players.

Although Laws has often been characterized strictly as a "smooth jazz" artist, he might be the first instrumentalist to score hits in the emerging "quiet storm" subgenre of R&B. Signing to Eddie Holland's HDH label in 2004, he cut Everlasting, which hit number 39 on the jazz charts. Though Laws hasn't recorded an album since then, he continues to tour and do sessions work. In 2017, he dropped the R&B single "Settle Down" on the Bungalo/CIA label.