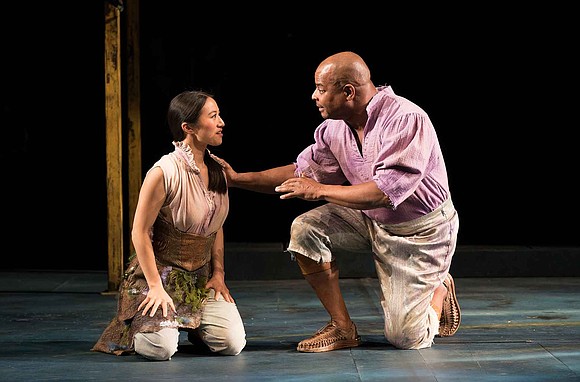 One of the two best shows I have seen so far this season at the Oregon Shakespeare Festival is on stage until October, while the other closed on July 30 but deserves a deep bow of respect.  Two highly anticipated final shows open at the end of this month.

You can still see “The Tempest” on the outdoor stage through October 15.  I had the pleasure of seeing the great Kevin Kenerly as Prospero, the banished duke who has spent years in exile enslaving a spirit. Ariel, and a perceived monster, Caliban, along with raising his young daughter Miranda and accumulating spiritual power that may make possible the revenge he has longed for against his enemies, including his usurping brother.  Kenerly was masterful as Prospero; he has a way of infusing with intention every movement down to the slightest muscle twitch, and his deep voice and presence commanded the stage while still conveying sorrow and subtlety.

Such is the depth of Black talent at OSF that, as of August 10, viewers will have the pleasure of watching Tyrone Wilson step into the role of Prospero and Chris Butler step into the role of Alonzo formerly played by Wilson.  These two masterful veterans will no doubt bring their own power into the production.

The casting is particularly interesting given that the play involves a story of colonization.  Prospero has landed on this island due to wrongs done to him, but quickly assumes the role of colonizer, enslaving the island’s two residents and exercising benevolent but total control over Miranda.  Casting a powerful Black man in the role holds the potential to wake up some audience members—particularly those of us who feel most acutely the impacts of colonization—to the moral ambiguity of his character.  He is sympathetic yet problematic, a sometimes kind dehumanizer—not unlike many colonizers.  Are we prone to excusing these behaviors given his own status as victim, his legitimate grievances, his compelling presentation?  How should we think about these ambiguities?

This production benefits from an additional Black actor in the role of the spirit Ariel—Geoffrey Warren Barnes II.  New to OSF, Barnes’s presence and voice are so transporting that they supports the illusion of flight.  Both he and Caliban (James Ryen) are treated as other on an island which birthed them; it’s worth watching how their responses to dehumanization may evoke different levels of sympathy; though one is more appealing than the other, ought we be satisfied with that explanation for any difference in our response?

The uncluttered conception of the show serves these ruminations, and standouts in the remainder of a solid cast are Grace Chan Ng as Prospero’s daughter Miranda and William Thomas Hodgson as Ferdinand, who quite understandably falls in love with Miranda on sight.  Too young and innocent to be distracted by the power plays happening around them, their purity of heart offers a sort of alternative universe, in which uncomplicated love is possible, even as one wonders how good one’s heart must be to sustain such clear intention.

I regret that family challenges this summer prevented me from offering more timely accolades to OSF’s wonderful production of “How I Learned What I Learned,” which closed July 30.  Steven Anthony Jones positively channeled playwright August Wilson’s brilliance and wisdom in this moving production, which genuinely felt like sitting at the feet of the master.  Wilson originally performed this monologue himself, before his passing in 2005, and while I could only wish to have heard him in person, Jones captures so well the sense of Wilson speaking across more generations than the one lifetime he lived, and Tim Bond’s fine direction contributed to a performance that felt intimate yet expansive enough to fill the Bowmer stage.  A deep bow of respect for this thoroughly satisfying show.

Two final shows will open at the end of this month.  “King John,” directed by Rosa Joshi, presents a cast of female and non-binary performers in Shakespeare’s history play.  Presented in conjunction with Seattle’s upstart crow collective and benefiting from a fine cast and Joshi’s strong direction, this tale of a corrupt monarch promises to speak directly to current challenges.  And OSF Artistic Director Nataki Garrett directs the West Coast premiere of “Confederates,” playwright Dominique Morrisseau’s work about two brilliant Black women facing related struggles a century apart.  I’m looking forward to catching both shows between now and their closing at the end of October.