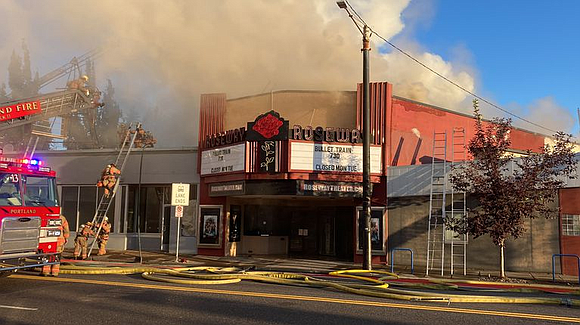 Fire shuts down local entertainment for community in Portland Photo courtesy of Portland Fire & Rescue
Just before 6:00am on Saturday morning of Aug. 6, 2022, Portland firefighters were summoned to a three-alarm fire at the nearly decade-old Roseway Theater on Northeast Sandy Boulevard. Although the smokejumpers were eventually able to defeat the blaze, the impact it has left on the building has caused uncertainty due its appearance. Damages range from interior havoc on the floors to an extensive flawed roof of the treasured theater. The cause of the fire is still under investigation and unknown at the time.  Despite the damages caused by the flames, neighbors of the popular theater remain hopeful.

As the news spreads of the fate of the beloved theater, many onlookers are somber by the potential loss and reminisce of their most memorable visit as they pass by.

19 year old Amy recalls being able to watch movies at the theater with kids she babysits during the summer, “those were the days when we would all bike over to the theater and go grab a pizza next door afterwards.” Others too in the film going community are disheartened by the threat of a permanent loss and what it will mean for the neighborhood. “Being able to go to the movies once a month with my husband is really all we can afford, being on a fixed income. I don't know what we will do to get out of the house now” said 67 year old Gertrude.

The theater has been in continuous operation since 1925 and was renovated by owner Greg Wood after he purchased it in 2008. Since then, it’s been one of the most popular and low-cost theaters in town catering to the Roseway neighborhood and beyond. To lose this gathering place would be devastation and take a toll on people of all ages. Yet community members remain optimistic it will recover from the fire and restore its contribution of joy to patrons who have supported the movie house throughout the years. At this time, the future of the neighborhood staple’s recovery is bleak, leaving yet another historic landmark’s future in limbo.