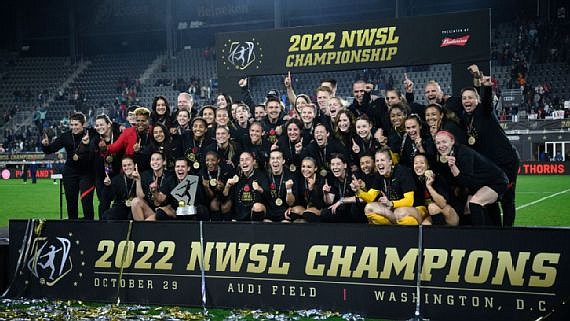 The Portland Thorns won the National Women’s Soccer League title this past Saturday night in front of thousands of fans in a 2-0 victory at the Audi Field in Washington DC. This is their third championship in team history. The first was in the league’s inaugural season in 2013 and the second in 2017. The Thorns players sprinted toward one another with open arms after the great win. For the Thorns, winning the title is the end to a tumultuous year for both the league and the franchise. Hundreds of fans gathered at the departure level of Portland International Airport the following Sunday to welcome the team back to the Rose City.

The team’s explosive forward and MVP Sophia Smith scored on a goal less than five minutes into the contest and added a second with an own-goal in the 56th minute. According to the New York Times Sophia Smith said “We’ve gone through a lot of stuff that isn’t in the job description.” Smith’s fiery play throughout the game and standout performances by veterans like defender Becky Sauerbrunn were just two reasons the Thorns dominated. Their victory ended the championship hopes of the Current, an expansion team that was having a phenomenal year after finishing 2021 in last place.

Smith added that soccer was her “escape from all the things going on,” taking care to remind herself that she loved the sport and found it to be a beautiful way to keep the abuse scandal from distracting her from her goals. Earlier this month Portland Thorns owner Merritt Paulson removed himself from a decision-making role with the National Women’s Soccer League club until the findings are released from an ongoing investigation into numerous scandals around the league.

Throughout the years, the Thorns, which is one of the league’s original teams, have accomplished so much, seen so much and have weathered so much as the league has become more popular and visible. This year’s playoff games have had record attendance and Saturday’s championship game was the first one shown on prime-time television.