Uniforms to debut on November 15 Game 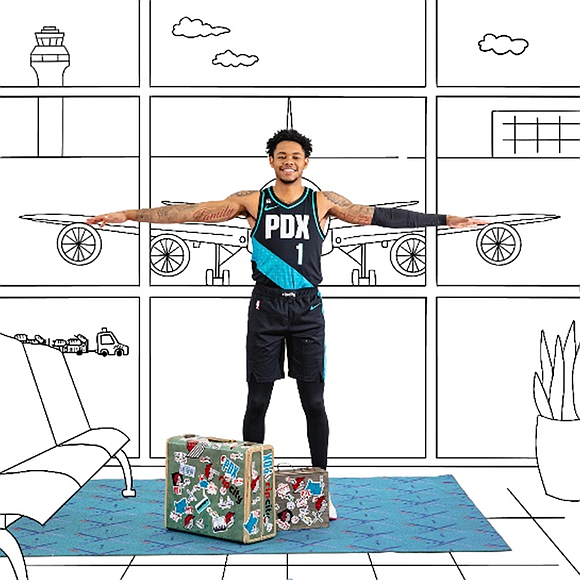 A preview of the new uniforms for The Portland Trail Blazers

The Portland Trail Blazers have unveiled the 2022-23 Nike NBA City Edition uniform, paying homage to the original Portland International Airport carpet pattern that has developed a passionate following. The uniform has a familiar look to it with a black base and the signature Blazers sash featured across the chest – this time filled with the teal and geometric-shape pattern locals will recognize from their travels.

The City Edition uniform showcases the confidence and quirkiness that defines Portland, as no other team or city would embrace an airport carpet pattern to the degree that Portlanders have. The pattern, with its bright teal base and unique geometric shapes, represents the view of the North and South runways as seen overhead from the sky. The carpet’s cult-following grew after reaching local icon status, as it became tradition for travelers arriving or departing out of PDX Airport to take photos of their feet safely planted on the colorful carpet to post on social media.

While travelers used the carpet to make a statement regarding their travels, the uniform is sure to make a statement on the hardwood. It features “PDX” across the front of the uniform, the official code for Portland International Airport and a common nickname for the city, in bold white font and the classic carpet pattern across the chest and down one side of the shorts. The other side of the shorts features the team’s primary “pinwheel” logo while showcasing the team mantra “ripcity” on the belt buckle.

Fans can purchase the City Edition uniform today at ripcityclothing.com, in-person at Rip City Clothing in Moda Center or at the brand-new Rip City Clothing pop-up store in Concourse C of the Portland International Airport.