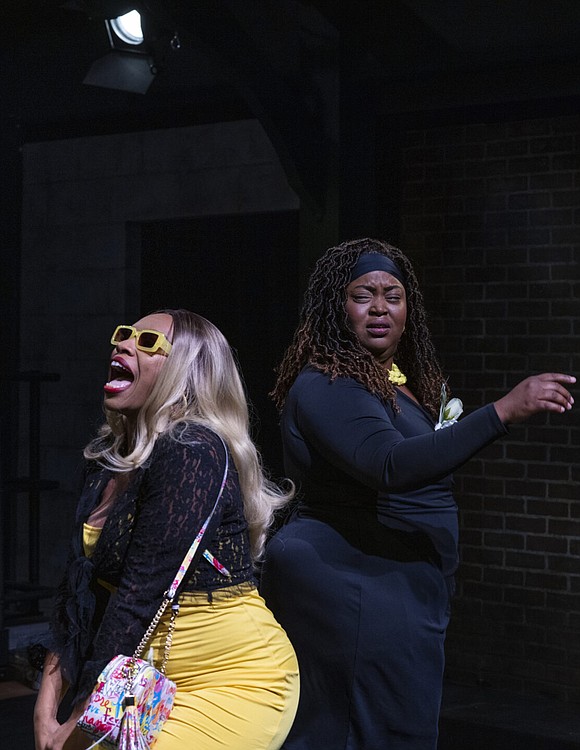 Portland Playhouse has opened its 15th season with “Chicken & Biscuits,” a comedy that is specifically and joyfully Black.  One could not ask for a more delightful night at the theater.

Playwright Douglas Lyons (who previously appeared on stage in Portland in the national tours of “The Book of Mormon” and “Dreamgirls”) sought to mine the humor, music, and theatricality of Black church for his first play.  It’s terrain he knows well; both he and director Cycerli Ash-Barlocker (a gem of Portland stages, including in Profile Theater’s heart-stopping recent production of “Sweat”) are PKs themselves—that’s “preacher’s kids,” for the uninitiated, and in the Black church tradition that likely means spending some part of most days in church.

The setting of “Chicken & Biscuits” is not just Black church; it’s a Black church memorial service—and those of us with church backgrounds know that only weddings compete with funerals for most drama in church.  Here, two sisters gather to enact their familiar conflicts at their father’s memorial.  The oldest, Baneatta (Valerie Yvette Peterson, balancing anxiety with imperiousness), is now the church’s first lady; her husband Reginald (Donterrius Ruff, whose moves including knowing when to stop forward and when to step back with equal deftness) is assuming the role of head pastor in the church her father led.  The younger sister, Beverley (a hilarious Brittney M. Caldwel), stakes the opposite pole of respectability; indeed her choices of wardrobe and demeanor equate dominance with outraging her sister.

Naturally, there are other family conflicts in evidence too.  Simone, the daughter of Baneatta and Reginald, is nursing her own set of hurts and grievances; Treasure Lunan (last seen powerfully embodying Aunt Ester in Portland Center Stage’s excellent production of “Gem of the Ocean”) imbues Simone with surprising complexity and depth.  Her brother Kenny decides to bring his white boyfriend Logan along, even while both know to expect “reverse ‘Get Out’” passive-aggression from Kenny’s family members, who can’t bring themselves to remember Logan’s name or acknowledge his importance to Kenny.  Chidube Egbo imbues Kenny with gentleness that deteriorates into exasperating but understandable deference to the family norms, and Austin Comfort makes the most of his many comedic moments as the alien invader boyfriend.  Beverley’s teenage daughter, La’Trice (Ashlee Radley having the best time), has no intention of taking anyone or anything seriously.

Their simmering conflicts predictably come to a chaotic boil—which is fun for us at least.  Portland Playhouse may be ideal setting for the play’s West Coast premiere; what better place than the intimate space of this former Black church to plunge us into the humor and drama of church and family conflict.  Ash-Barlocker clearly knows her way around this material, enlisting music and physical comedy to show us good people who are loveable even at their worst and respecting the characters enough to see beyond type.  Wanda Walden brings her reliably good instincts to the costume design, and the cast (including Tamera Lyn as a visitor who may or not be a surprise to everyone) make the fun infectious, evincing signs of a community built with care.

It’s hard to imagine that the big Broadway house where assistant director Charles Grant first experienced this play held it as well; Portland Playhouse feels better designed to held the play’s intimate energy in a believable way, though we probably have Broadway to thank that the play found its way to us at all.  This show may feel simple, but it is also delicious, just like a good meal of chicken and biscuits.  It plays through October 30.