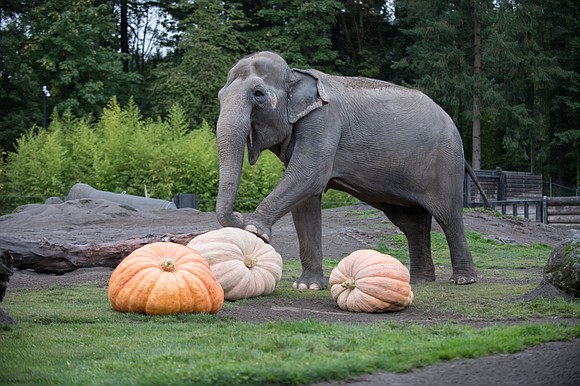 The Oregon Zoo’s Asian elephant family destroys and enjoys some giant pumpkins during last year’s Squishing of the Squash. Photo by Shervin Hess, courtesy of the Oregon Zoo.

Some of the world’s largest land animals demolished some of the area’s largest pumpkins this week. The fun took place at last Thursday during the Oregon Zoo’s 24th annual Squishing of the Squash.“We’ll be giving our elephant family some extra-large pumpkins to stomp on and chomp on,” said Steve Lefave, who oversees the zoo’s Asian elephant area. “First they destroy them, then they enjoy them.”

The event is a lead-in to the zoo’s annual Howloween celebration presented by The Oregonian/Here Is Oregon, which takes place later this month. Kids can show off their costumes and learn about wildlife in a fun and safe setting, Oct. 22–23 and Oct. 28–31.

The tradition dates back to 1999, when Hoffman’s Dairy Garden of Canby dropped off a prize-winning 828-pound pumpkin for the elephant family. Farmers often offered their overstock pumpkins for use in the zoo’s groundbreaking animal enrichment efforts — enhancing animals’ well-being with stimulating and challenging environments, objects and activities. This year’s pumpkins were provided by Pacific Giant Vegetable Growers Club member Larry Nelson and his daughter, Amanda Gilmour.

Wild Asian elephants face threats from habitat loss, conflict with humans and disease. Only 40,000 to 50,000 of them remain, in fragmented populations from India to Borneo. The zoo has established a $1 million endowment fund supporting Asian elephant conservation. To plan your trip, go to oregonzoo.org/visit. For more information on getting to the zoo, visit Explore Washington Park.