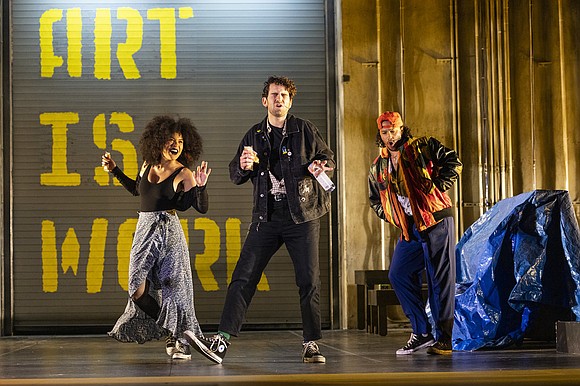 Portland Center Stage has opened its season with a superb main stage production of the musical, “tick, tick . . . BOOM!” Allowing for the fact that Lin-Manuel Miranda played the lead in a 2014 revival of the show that also featured Leslie Odom, Jr. (which must have been something), I wonder if this might be the definitive production.

I say that as someone not especially in the thrall of the show’s creator, Jonathan Larson, who famously and tragically died immediately before the first production of his smash hit, “Rent,” for which he later posthumously won the Pulitzer Prize for Drama and a Tony Award for Best Musical.  I have experienced Larson’s work as a cultural phenomenon which captured a generation’s experience of struggle and loss but which had some maturing to do, thwarted by his untimely death.

“tick, tick . . . BOOM!” is an earlier work than “Rent,” devised as a one-man show starring Larson himself and depicting his own youthful struggle as an aspiring artist who wanted to write the next great musical before his impending 30th birthday.  After Larson’s death, playwright David Auburn restructured the show as a three-person musical, necessarily a more modest show than “Rent,” and sometimes called a prequel to that iconic show.

But even with that somewhat self-indulgent set-up, this production doesn’t feel self-indulgent.  In fact, more than any production of Larson’s work that I’ve seen, the cast and creators of Portland Center Stage’s production manage to hold the time and place of the show (and of Larson himself) more vividly, inspiring warmth and sympathy and even reflection. A bit surprisingly, it’s a revelation.

Perhaps the most obvious reason is its terrific cast.  Jesse Weil, who happens to bear a striking resemblance to Larson, soars as Jon.  His vocal range is rich and vibrant, a joy to listen to, and he invests each movement with intention that moves you to invest in his youthful dreams.  Importantly, he is a wonderful scene partner to the other members of the cast, both Black Portland actors brimming with charisma and range.  Tyler Andrew Jones is riveting as Jon’s best friend Michael, along with a range of other roles; he bristles with energy and commands attention without hogging it.  And Lauren Steele, likewise, is brilliant as Jon’s girlfriend Susan, along with a range of other roles; her vocal range is so dramatic that by the time she gets to her solo as Karessa in Jon’s production of his new show and implores you to “Come to Your Senses,” it sounds like you are listening to a different person than you have been listening to for an hour.  Jones and Steele turn themselves into a larger cast, catching your breath with each transformation.

The three cast members together are a marvel, making the most of the gorgeous harmonies that feel so characteristic of Larson’s other work and moving together with joy and alacrity.  And they make the most of deft choreography by Muffie Delgado Connelly, smart costumes by Lucy Wells, versatile scene design by the design collective known as dots, and wonderful work from the musicians along with musical director Ash.  PCS artistic director Marisa Wolf’s direction invests the show with intention; each movement of body and voice feel spontaneous in the way that can only reflect careful and thoughtful work.  The show’s lean staging captures the hunger of its characters, and assists in transporting you to the places you are meant to imagine.

Strangely, for the first time watching Larson’s work, I thought about the fact that Larson is writing for and about my own generation, and capturing things about how we experienced coming of age that are specific even while people in other generations still connect to them.  I appreciated how Larson’s love of musical theater brims through so many of the musical cues and language.  And the artists have captured something of the hunger of youth and the contradictions of heart, toil, and longing that are so much a part of artistic creation which fights for recognition in a world that may or may not be discerning.

The show’s 95 minutes move tightly and joyfully, and it’s hard to imagine a better way to spend them.  You can catch this beautiful work at Portland Center Stage through September 18.