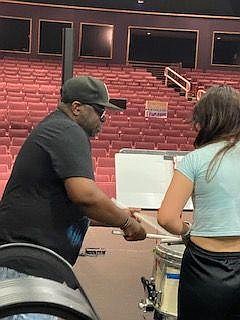 From a distance, if you listen closely you can hear modern pop music being played and accompanied by the laughter of students along with spontaneous grunts of his 16 member drumline. As students engage and focus on Beyonce’s Crazy In Love, they attentively shift into their next song of this year’s themed “Pop Divas” performances in preparation for upcoming football games.

Ballard recalls some of the adults that had an impact on his life, “my uncles are all musicians and the story goes that I would tap and beat on everything! My parents told me they took me to the Ringling Brothers Circus and that’s how I started drumming.”

Ballard perfected his craft at the School for Performing Arts in Rochester along with indulging in the mentors around him, “like I said, my family are all musicians and my uncle was kind of like a big influence because he too was a drummer. I used to watch him at tent revivals and listen to my big cousin play. I started playing the drums at the age of three and here I am.” Ballard hopes that his son will one day follow in his footsteps too since he is already joining him in sessions.

Ballard has made Portland his home and is rooted in the community. He studied at Warner Pacific College and received his master's degree in Education, is an honored band member at several metropolitan churches, and helps out at his sister in-laws' venue the infamous World Stage Theater.

Being a member of the Drum Corps International (headed by Ronnie LaGrone) has been a highlight of Ballards career.  He is optimistic that Portland will invest in its youth when it comes to supporting the Performing Arts locally. “We should be encouraging our young people to engage in the arts when possible and to pursue their dreams.” Ballard explained this is an authentic  way to build community, “all my friends are products of the Performing Arts scene and music programs, this has had a lifelong impact on my life and the joy it’s brought me is immeasurable.”