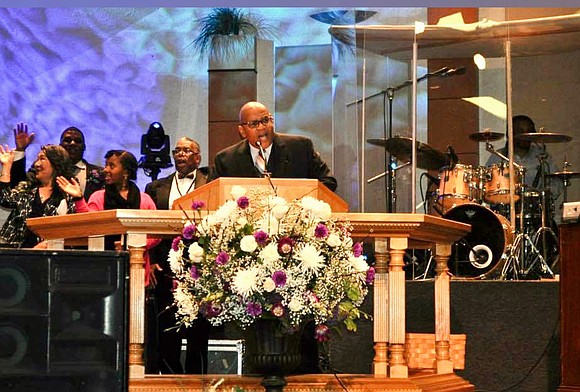 Ken Berry speaks during the Martin Luther King Celebration
After taking two years off because of the pandemic, the World Arts Foundation’s annual tribute to Dr. Martin Luther King Jr., will once again be held live and in person at the Highland Christian Center, 7600 NE Glisan St., on January 16 from 1 to 4 p.m.

Ken Berry, co-founder of the arts foundation, who has spearheaded the “Keep the Dream Alive” program at the church for the past 38 years, is also passing the torch to organizing the event to his brother, Kevin Berry, and Sandra Wadsworth.

The program will be somewhat shorter than the previous daylong celebrations of the past, but will once again include various speakers, live music and more, Berry said.

The idea for the annual tribute began back in 1978 when Berry was a deejay at KBOO radio, starting as a radio program, and then growing over the years to live celebrations at various locations. All the celebrations were filmed in various formats, and last year were compiled in a documentary that highlighted more than 40 years of the annual event.

The event has been held at Highland Christian Center for the past 38 years, Berry said, and will be aired on KBOO, and several other outlets, including Open Signal at opensignalpdx.org, worldartsfoundation.org, YouTube, and possibly Oregon Public Broadcasting.

“Last year OPB did a one-hour tribute to the King program and we’re tentatively waiting to see if they will do it again this year,” Berry said.

Like many others in the African American community, Berry’s awareness of Dr. King goes back to his parents, who led various community activities, both in churches and other locations.

“For example, when the Lloyd Center opened in 1963, they did a Christmas program outside in the cold, when it was an outside mall, and did a lot to reach out to the broader community,” he said.

His mother was a poet and writer, he said, and spearheaded many programs to bring together people of different backgrounds, and the present day program is a continuation of her dream to spread the message of Dr. King.

“She basically taught the communication of love, peace and joy,” he said. “It’s something you have to practice on a daily basis, particularly now with so much discord going on. We have to have compassion for others and love for others.”

His parents made sure their children were involved in “a multitude of activities,” he said, to teach of the need to serve others.

“The reward for the air we breathe is service to others, giving rather than receiving,” he said. “The life we live as adults is that the more we give, the more we receive.”

This year’s program will focus more on young people, Berry said, so that they will continue the tradition through this year’s theme, “Passing the Torch — Still We Rise.”

To bring in more young people, Wadsworth said there will be campaigns in local high schools for internships with the World Arts Foundation.

“We also want to get folks involved in the King program and will also go to surrounding colleges to do a campaign,” she said.

Wadsworth said that Ken Berry and Michael “Chappie” Grice have been the long-time leaders of the King celebration, she said, and said more volunteers are always needed.

“Michael and Ken are ready to pass the torch, and Kevin and I are filling in to keep the program going,” she said. “But we definitely need folks who are committed to it. It’s a lot of work.”

Among this year’s entertainers will be the gospel choir DaNell Daymon & Great Works, she said, along with vocalists Alonzo Chadwick and Arietta Ward, said Kevin Berry.

“Sandra will also have a children’s choir perform, and though the program has been cut down, we’re excited about what we’re bringing to Portland,” he said.

The program is free, he said, but they are asking people to bring five cans of non-perishable food or make a $5 donation.

In addition to the program in the church sanctuary, the event will also feature a Victory Village in a separate room, Kevin Berry said, where people can buy and sell items, many hand-made.

“Normally we have about 60 vendors, but this year it’s 26 or 28,” he said. “Multnomah County will also do health screenings and provide Covid shots.” Masks are encouraged but not required, he added.

“We excited that we’re coming back live and want the community to come out and bring the entire family,” he said.