A Lifelong Believer in Teachings of Dr. King 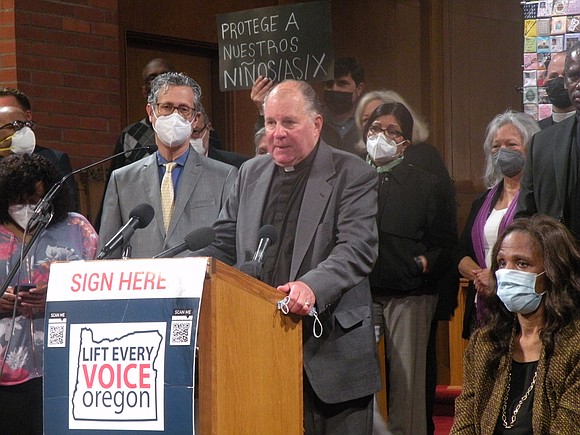 His mother was an activist who took him to hear Stokely Carmichael speak, Knudson said, and taught him the principles of nonviolence and tolerance, but it was when he played Pop Warner football that he really internalized it.

That was around the time that the Civil Rights Act was passed that led to significant changes in American society.

“We’d knock each other down and then we’d talk about what was going on in society,” he said. “It opened my eyes in many ways and when you experience it first-hand it is profound. It makes you want to see justice.

“That’s the gift of diversity, to make sure everyone has an equity lens and a justice lens,” he said. “So I talked to my mom and said we have to work to end racism and war and poverty. As a teenager you may not realize you’re thinking like that, but then you see it first hand.”

Dr. King spoke at a Lutheran youth gathering back in the 1960s, he said, and in 1994, when Knudson was national director of the Evangelical Lutheran Church in America Youth Ministries, he arranged for Bernice King to speak to the 35,000 teenage members.

On January 15, 1991, he also attended a gathering to honor Dr. King at the Ebenezer Baptist Church in Atlanta with his wife and son, both with an African-American background.

“It was amazing with a who’s who in the civil rights movement, including Jesse Jackson and Ralph Abernathy,” he said.

Both he and his wife have diverse backgrounds, Knudson said. “Fifteen of our 26 nieces and nephews, including my son, are multiracial. That’s who we are.”

Knudson grew up in Portland, graduated from the University of Oregon, went to seminary in Berkley, California, and got his doctorate at the Wesley Theological Seminary in Washington, D.C., which he said was one of the most diverse institutions in the country, both students an instructors.

With that background, it’s no surprise that Rev. Knudson, as a member of Life Every Voice Oregon, helped lead the successful effort for the recent passage of Measure 114, one of the most stringent gun control initiatives in the country.

Interfaith leaders had been working together for decades, but the effort for Measure 114 began after the Pulse nightclub killings in 2016 and the group officially organized after the Parkland High massacre in 2018.

“We have thousands of volunteers around the state and we hope that it is a cultural shift,” he said. “It was built that way on purpose and Dr. King’s principles were a core to our campaign.”

The gun control measure is being challenged in court, but that was expected, Knudson said, but he’s been getting calls about it from all over the country. “We knew there would be challenges, but it could have impact nationally.”

“The message today is that God is able, God is love, and love can overcome hate and help us weave the Beloved Community, where justice, equity and peace are abundant.”