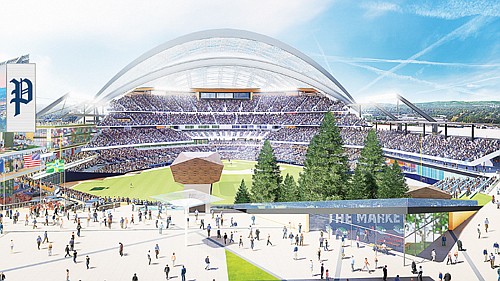 An artists’ rendering of a Major League Baseball stadium that’s envisioned to rise from the Port of Portland’s Terminal 2 property, about 45 acres of riverfront property north of the Pearl District on Northwest Front Avenue. Promoters announced last week that they have an agreement with the Port to develop the property.

Riverfront site gets backing from Port of Portland

Portland Diamond Project, the organization behind an effort to bring Major League Baseball to Portland, announced Thursday it has signed an agreement in principle with the Port of Portland to develop the Port’s 45-acre Terminal 2 property in northwest Portland for a new stadium.