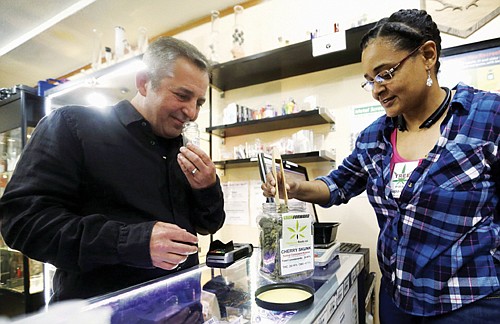 Adam Smith, founder and executive director of the Oregon Craft Cannabis Alliance is shown a marijuana variety by Tree PDX marijuana shop owner Brooke Smith at her shop in Portland. Smith is part of a newly formed group that will launch an ad campaign to support mom-and-pop cannabis retailers.

Oregon is awash in pot, glutted with so much legal weed that if growing were to stop today, it could take more than six years by one estimate to smoke or eat it all. Now, the state is looking to curb production.